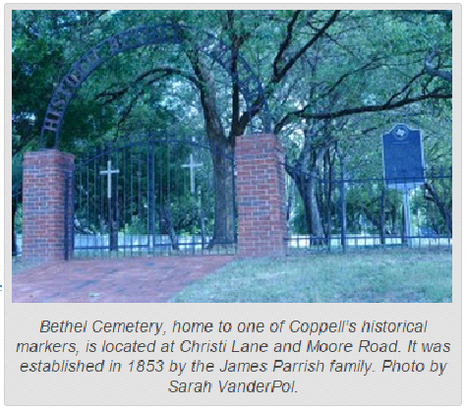 On a typical north Texas summer afternoon, Coppell residents may find themselves enjoying nature under the shade of a beautiful oak tree at Grapevine Springs Park. What they may not realize is that Sam Houston camped under that very same tree in 1836.
In a town known for constant growth and development, Coppell residents often forget about the city’s history. In fact, while we might not talk about it much in class, Coppell has a very distinct past of its own.

The Texas Historical Commission has been honoring the state’s most unique and historic sites since 1962 with its historical marker program, which has become the most prolific marker program in the country. As of January 1, 2013, there are 15,828 markers in the state with markers in all of Texas’s 254 counties. Dallas County alone has over 300 markers. If you dig deep enough, you’ll learn this extremely modernized town, Coppell, boasts three markers itself.

While Coppell was not incorporated until 1955, its history dates back over 100 years earlier. The area now known as Dallas-Ft. Worth was first settled by German and French immigrants in the 1840’s, when the area was known as “Peters Colony.” It was not until 1848 that Coppell began to really take shape. That was the year that James Parrish and his family established a homestead along present day Moore Road.

The most interesting of the two is Bethel. While the cemetery currently is only about a half-acre, it once was around two acres, with over two hundred graves. Now sadly due to robberies and suburban development, a mere two marked graves remain.
The two remaining graves belong to 1-day-old Oda Kirby, who died in 1909, and 3-year-old Ervin Wickersham (1910-1913).
“In the 1960s, our mayor, W.T. Cozby, (who Coppell named its library after), his sister, and others realized what was happening to the cemetery and took steps to stop its destruction,” Coppell Historical Society Recording Secretary Pete Wilson said. “By state law, nothing can be built over a cemetery.”

​But unfortunately the damage had already been done.
“By that time, homes were already being built in the area,” Wilson said. “The city required the builder to stop building long enough to do an archaeological survey. It revealed many, many graves in the area, some already underneath new homes. When all was said and done, a compromise was reached between the city and the developer who, after all, had paid a lot of money for the land he intended to develop.  Whether or not the developer knew about the cemetery he was destroying remains a mystery.  Many of us believe that he hoped he could complete development before anyone became savvy.”

In 1989, Bethel Cemetery was the first of the three historical markers in Coppell to be designated.

The second marker designation in Coppell took place with the unveiling of the Parrish Family Cemetery historical marker in 1991.

While this cemetery is slightly smaller than Bethel, the two locations have an abundance of similarities. For instance, both are now completely surrounded by residential development, though Parrish has not had nearly as many development issues as Bethel, and the cemetery is well preserved to this day. The cemetery was also founded the same year as Bethel, by the same family.

​The third spot in Coppell to claim a historical marker is Grapevine Springs Park. Grapevine Springs is probably the most unique of the three locations, simply because its history goes beyond the Parrish family era. The Republic of Texas President Sam Houston camped here for weeks in 1836 during treaty negotiations with Native Americans.

While the treaty was ultimately signed at Bird’s Fort near present day Six Flags Over Texas, the park’s history continues on into the 1930s, when the Works Progress Administration (WPA) built multiple park structures. Despite all of this history, the marker was not designated until 2005.

The importance of Texas’ historical marker program has had a profound effect on both the community and the entire state.

“For many years, historical markers have been the primary way that historic sites have been recognized,” Wilson said. “At least in the past few decades, sites would have been lost if not for official state recognition.”

While Wilson reiterated the importance of the markers, he also addressed a few drawbacks to the program, and shared an interesting way Coppell and other nearby towns are working around it.

“The state markers are still considered a very special recognition,” Wilson said. “But the documentation required to get a state marker, plus the cost (about $2,000), limit the number of state markers that a local community can get for itself. Although the state handles approving a marker and the final wording on it, locals have to do all the documentation and pay for it.

​“In the last few years, towns have started making their own local historical markers, and they have total control over the entire process. That’s what our Coppell Historical Society is doing now. As a result, we will probably equestrian fewer state markers.”