​
Fort Bird History
The fort was stockaded and contained a blockhouse and several cabins.
From the marker: "Established in 1840 by Jonathan Bird on the Military Rd. from Red River to Austin. In its vicinity an important Indian treaty, marking the line between the Indians and the white settlements, was signed September 29, 1843, by Edward H. Tarrant and George W. Terrell, representing the Republic of Texas. The ragged remnant of the ill-fated Snively expedition sought refuge here, August 6, 1843. (1936)"
Bird's Fort was situated about twelve miles southeast of Birdville and six miles north of Arlington on the north bank of the Trinity where Calloway's Lake is located.


Current Status
Only a marker remains. Marker may be located on South Main Street at the Silver Lake Gun Club.  This marker was relocated to River Legacy Park in 2003. The Bird's Fort site is about 1 1/4 miles north-northeast of this location.
​ 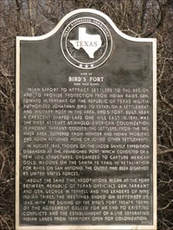 Marker Text
In an effort to attract settlers to the region and to provide protection from Indian raids, Gen. Edward H. Tarrant of the Republic of Texas Militia authorized Jonathan Bird to establish a settlement and military post in the area. Bird's Fort, built near a crescent-shaped lake one mile east in 1841, was the first attempt at Anglo-American colonization in present Tarrant County. The settlers, from the Red River area, suffered from hunger and Indian problems and soon returned home or joined other settlements.

In August 1843, troops of the Jacob Snively expedition disbanded at the abandoned fort, which consisted of a few log structures. Organized to capture Mexican gold wagons on the Santa Fe Trail in retaliation for raids of San Antonio, the outfit had been disarmed by United States forces.

About the same time, negotiations began at the fort between Republic of Texas officials Gen. Tarrant and Gen. George W. Terrell and the leaders of nine Indian tribes. The meetings ended on September 29, 1843, with the signing of the Bird's Fort Treaty. Terms of the agreement called for an end to existing conflicts and the establishment of a line separating Indian lands from territory open for colonization.