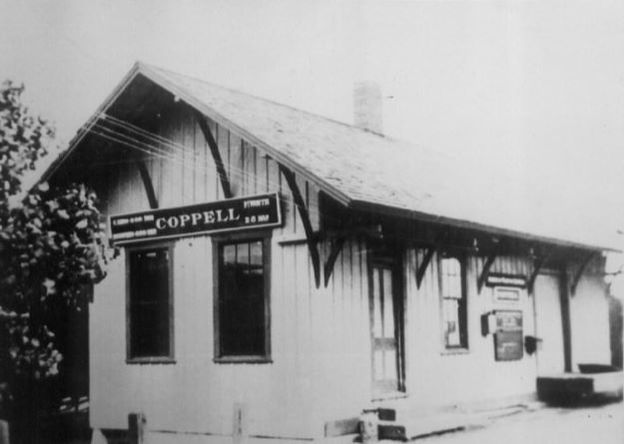 ​By 1873, the community became known as "Gibbs," in honor of former Texas Senator and Lieutenant Governor Barnett Gibbs.
In 1888, the St. Louis, Arkansas and Texas Railway opened its railroad from Fort Worth to Commerce, passing through the town of Gibbs, Texas.  Eventually, the route was called the Cotton Belt Line.  In 1890, the railroad company built a large depot on this site (near the southeast corner of Southwestern Blvd. and S. Coppell Rd. and north of the railroad tracks) and named it Coppell, apparently in honor of George Coppell, an influential New York banker who had been instrumental in the success of the St. Louis line. Two years later, in 1892, the town officially changed its name to Coppell.
The depot served as a gathering place for local residents who came to watch for the next train arrival.  Coppell railroad agents included Oscar Cooper, Myrtle Hurst, and Clayta Harwell.  During World War II, when passenger traffic dwindled to occasional freight deliveries, the original depot was torn down and replaced by a smaller depot.  It remained in limited use until 1957 when it was purchased and moved approximately one mile west to a farm owned by Bill and Laura Faye Kirkland.