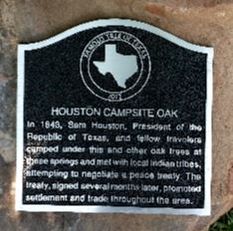 ​Houston Campsite Oak
In 1843, Sam Houston, President of the Republic of Texas, and fellow travelers camped under this and other oak trees at these springs and met with local Indian tribes, attempting to negotiate a peace treaty.  The treaty, signed several months later, promoted settlement and trade throughout the area.

Location:  Attached to a bolder at the foot of the large oak tree.
​MARKERS OF INTEREST LOCATED OUTSIDE OF COPPELL