​On February 2nd, we lost our longtime member, past President,
​and key player in the founding of Heritage Park, Pete Wilson.

He will be forever remembered.
Here are some articles which appeared in the Press:
​
Dallas Morning News:

His love of Coppell’s history began in high school when he started researching his hometown’s past, his sister Janis Arthur said. He served as an officer in the Coppell Historical Society. He helped preserve highly regarded Old Town Coppell and was a key player in the creation of Heritage Park.

​“He was literally a walking encyclopedia of all things Coppell and Coppell ISD,” the school district noted in its announcement of his passing.

We were devastated to hear the sad news of the passing of one our most beloved and influential alumni and former staff member, Pete Wilson. Our thoughts and prayers are with the Wilson and Arthur families during this difficult time. We are lucky to claim him as one of our own and rejoice in the fond memories of him as a former student and teacher in Coppell ISD.

Pete was born and raised in Coppell where the Wilson family has been a mainstay in the community for decades.  W. H. Wilson Elementary School was named after Pete’s father.  Pete’s brother-in-law served on the CISD school board for many years. Pete and his siblings as well as his niece and nephew are all graduates of CISD. In fact, Pete was a member of the first graduating class from Coppell High School in 1965.  He was honored as the first Mr. CHS, as well as the first valedictorian of CHS. Pete dedicated his entire life to education and fine arts in Coppell ISD where he taught for 36 years and directed the theater department at Coppell High School. For his outstanding contributions to CISD, Pete was recognized in 2019 as a Distinguished Alumni.

Pete’s reach extended beyond CISD with his extensive work with the Coppell Historical Society and Coppell Arts Council. As a founding member of Theatre Coppell, he served as its Artistic Director for many years. He has gathered and archived thousands of photos and written numerous papers documenting the town’s history. He has helped to preserve Old Town Coppell and was instrumental in the creation of Heritage Park.  He was literally a “walking encyclopedia” of all things Coppell and Coppell ISD.

Laura Springer, CHS Principal shared, “Mr. Pete Wilson impacted the lives of countless students at CHS through his direction and love of theater arts.  He entertained us with his shows, his laughter and his loving spirit. He will always live through the many performers who went on to hit the big stages from Mr. Wilson’s tutelage.  We will miss him greatly!”

Having worked with Pete while he was a teacher at CHS and principal, CISD Superintendent Dr. Brad Hunt states, “Mr. Pete Wilson was one in a million.  He did so much for education in our community and specifically Fine Arts.  He was a trailblazer who has impacted the lives of so many people. He could take talented kids and make them shine brighter and find the more shy kids and turn them into a star. There are no words to adequately describe the impact he has made to this community. His legacy will live on with the work he has done to showcase the arts in Coppell.”

Current CMS East choir teacher and former student Mrs. Lauren Danby shares, “What an incredibly sweet man who made his mark on this town and made Coppell a more beautiful place through his love of theatre and his effortless way of making connections with others. He has truly been a hero for Coppell. His spirit will live on through all the lives he has touched over these many many years. We love you and will miss you Mr. Wilson!"

Wilson Elementary Principal Cooper Hilton says, “Mr. Wilson's impact on our Coppell community will not soon be forgotten.  He was known around Wilson Elementary as a pioneer within our community, as a leader in the Arts, and as a local celebrity and valued guest on campus.  Wilson Elementary is proud to carry on his family's legacy.”

CMS North Theatre Teacher Brittany Reese said, “Pete Wilson was not only my mentor as the head of CISD Theatre, but he got me heavily involved in Theatre Coppell. I learned so much from him being in his shows. His love of Theatre and teaching was always present whether it was at CHS or at the old Fire Station on Moore Road. He dreamed of a Black Box Theatre at CHS and made it happen. He dreamed of an amazing Fine Arts Complex for the city of Coppell. He made that happen. That was Pete Wilson, the man who made dreams come true.”

CISD Board Vice-President and CISD alumni Leigh Walker shared her feelings about the impact Pete Wilson has had on her life, "I feel so fortunate to have gotten to know Pete Wilson first as my teacher, then as a fellow Coppell ISD alum, and finally as a Coppell Arts Center Foundation volunteer.

I first met Mr. Wilson in third grade when he cast me in a CHS theater production. Years later, we reconnected, and I got to know him in a whole new way as an adult, discovering his humor, wit, and authenticity.

Mr. Wilson sparked my love of theater as a child, and I know his lifelong work developing and supporting the arts in our schools and community will spark that love for generations to come.  The last time I saw Mr. Wilson, he was moving a set piece in the Coppell Arts Center black box theater that bears his name.  That is how I will always remember Pete Wilson-getting ready to direct the next play for all of us to see and enjoy."

So as he takes his final curtain call, we give a standing ovation to Mr. Pete Wilson and thank him for the impact he has had on the lives of so many people in CISD.

THEATRE COPPELL
Theatre Coppell has entertained and inspired local residents with comedies, dramas and musicals for more than 30 years. Shows were presented at schools and other locations in the area until 1999, when the City of Coppell converted an unused fire station to the Coppell Center for the Arts.

​The theatre was established in the mid-1980s as Coppell Community Theatre by a core group of volunteers, most of which are still active in the theatre. The first two shows, presented in 1988, were “Mostly Music,” a variety show fundraiser, and “A Funny Thing Happened on the Way to the Forum.”

​The early years included numerous variety shows and fund-raisers. Haunted houses, presented annually, included “Haunted Ghost Town,” “Haunted Hospital,” “Haunted Hayride” and “Haunted Hollywood.”
​
​From the beginning, the theatre has been guided by Wheelice Wilson Jr., who taught theatre at Coppell High School for 36 years. As artistic director of Coppell Community Theatre, he selects shows, marshals volunteers and directs most of the productions.

​The theatre shortened its name to Theatre Coppell in May 2005. Supported by the City of Coppell and many local residents, the all-volunteer theatre is a vital part of the community. Six shows are presented each season, including several family-friendly options, a musical and at least one production featuring young cast members. Not surprisingly, plays featuring children often sell out.

​​TC is governed by its members who are the “nucleus volunteers” who choose to be active throughout the season. Local businesses are invited to support the theatre by sponsoring productions or making donations.
​All shows are performed in the “black box theatre” of the Center for the Arts. The theatre is an intimate, 124-seat theatre with seating on three sides of the stage. 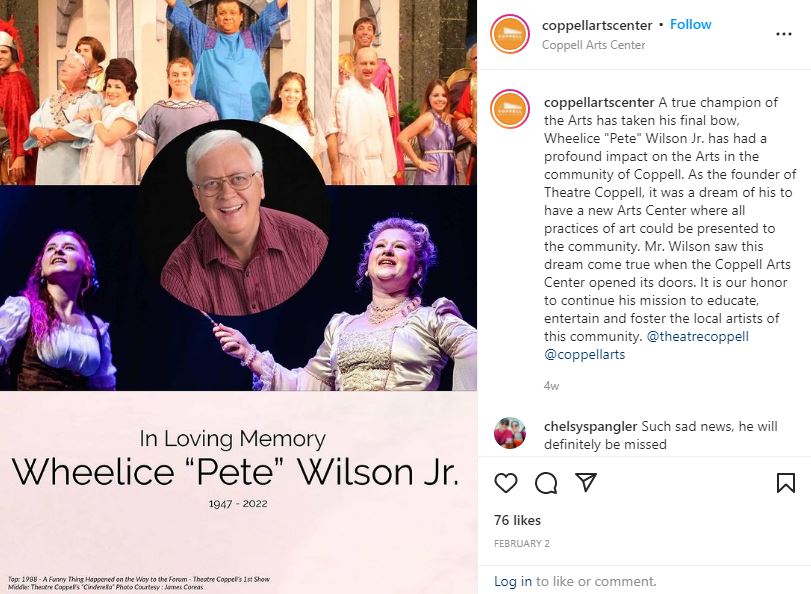